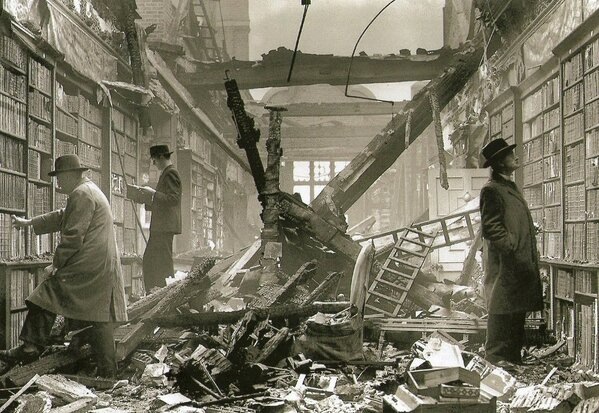 Business as usual in the Alibi Library despite the frequent air raids. (H H library, London, after a German bombing in October 1940)

These images from the ever excellent intervention artists Luzinterruptus, show us the dreary underbelly of Madrid, the sort of sinister place where the underworld and government ministers might mix in murky schemes.  Smoke as a form of protest.  No smoke without fire….

Brings to mind this description from Dickens´ London:

Fog everywhere. Fog up the river, where it flows among green aits and meadows; fog down the river, where it rolls defiled among the tiers of shipping and the waterside pollutions of a great (and dirty) city. Fog on the Essex marshes, fog on the Kentish heights. Fog creeping into the cabooses of collier-brigs; fog lying out on the yards, and hovering in the rigging of great ships; fog drooping on the gunwales of barges and small boats. Fog in the eyes and throats of ancient Greenwich pensioners, wheezing by the firesides of their wards; fog in the stem and bowl of the afternoon pipe of the wrathful skipper, down in his close cabin; fog cruelly pinching the toes and fingers of his shivering little ’prentice boy on deck. Chance people on the bridges peeping over the parapets into a nether sky of fog, with fog all round them, as if they were up in a balloon, and hanging in the misty clouds.

Or this from T.S. Elliot:

Visit Luzinterruptus on http://www.luzinterruptus.com/ to find out more about their projects.

The Alibi Library has decided to publish a little of its correspondence in homage to another somewhat more famous book also set in the Charing Cross Road: