I decided to include this library in this section given that most of you just won´t believe it´s real when you see the pictures of it: 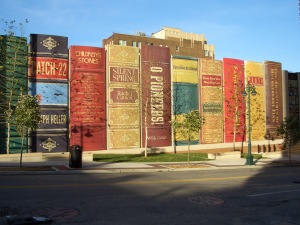 The Kansas City Public Library founded in 1873, is the oldest and third largest public library system in the metropolitan Kansas City area. 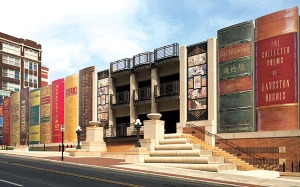 “The Community Bookshelf” (building design) itself showcases 22 titles reflecting a wide variety of reading interests as suggested by Kansas City readers and then selected by The Kansas City Public Library Board of Trustees.” 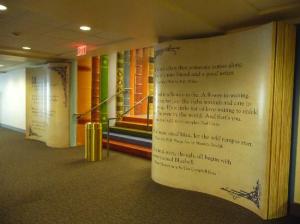 The blog has a section on:

Violence Among Us: Books that Focus on School Shootings

which must be something of a concern for young teens stateside. 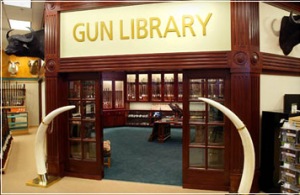 Finishing on a brighter note this sculpture from the atrium: 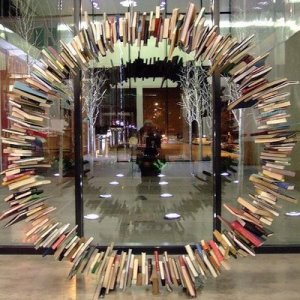 a universe of books http://www.nysun.com

Imagine a library whose proportions are so intangible to the likes of ordinary mortals like you and me that they have become a mathematical enigma.  Here are some values just to begin with:

A mathematician´s dream come true and a librarian´s nightmare.  Just imagine that the books could be arranged in

“The Library of Babel” (La biblioteca de Babel) is a story by author and librarian Jorge Luis Borges (1899–1986), conceiving of a universe in the form of a vast library containing all possible 410-page books of a certain format. 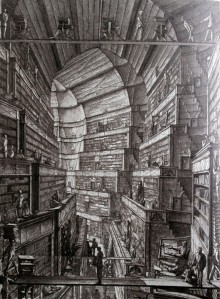 consists of an enormous expanse of interlocking hexagonal rooms, each of which contains four walls of bookshelves and the bare necessities for human survival. The order and content of the books is random and apparently completely meaningless.

The universe (which others call the Library) is composed of an indefinite and perhaps infinite number of hexagonal galleries, with vast air shafts between, surrounded by very low railings. From any of the hexagons one can see, interminably, the upper and lower floors. The distribution of the galleries is invariable. Twenty shelves, five long shelves per side, cover all the sides except two; their height, which is the distance from floor to ceiling, scarcely exceeds that of a normal bookcase. One of the free sides leads to a narrow hallway which opens onto another gallery, identical to the first and to all the rest. To the left and right of the hallway there are two very small closets. In the first, one may sleep standing up; in the other, satisfy one’s fecal necessities. Also through here passes a spiral stairway, which sinks abysmally and soars upwards to remote distances. In the hallway there is a mirror which faithfully duplicates all appearances. Men usually infer from this mirror that the Library is not infinite (if it were, why this illusory duplication?); I prefer to dream that its polished surfaces represent and promise the infinite … Light is provided by some spherical fruit which bear the name of lamps. There are two, transversally placed, in each hexagon. The light they emit is insufficient, incessant. 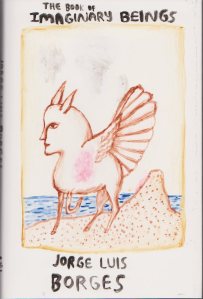 The books contain every possible ordering of just a few basic characters (23 letters, spaces and punctuation marks) and are exactly 410 pages long.

There are five shelves for each of the hexagon’s walls; each shelf contains thirty-five books of uniform format; each book is of four hundred and ten pages; each page, of forty lines, each line, of some eighty letters which are black in color. There are also letters on the spine of each book; these letters do not indicate or prefigure what the pages will say. I know that this incoherence at one time seemed mysterious. Before summarizing the solution (whose discovery, in spite of its tragic projections, is perhaps the capital fact in history) I wish to recall a few axioms.

Though the majority of the books in this universe are pure gibberish, the library also must contain, somewhere, every coherent book ever written, or that might ever be written, including predictions of the future, biographies of any person, and translations of every book in all languages, and indeed, every possible permutation or slightly erroneous version of every one of those books.

for every sensible line of straightforward statement, there are leagues of senseless cacophonies, verbal jumbles and incoherences

For example for every authentic book there will be:

Just one “authentic” volume, together with all those variants containing only a handful of misprints, would occupy so much space that they would fill the known universe.

The glut of information leaves the librarians, chief librarians, genius librarians etc in a state of suicidal despair. This leads some librarians to have superstitions and cult-like behaviour, such as the “Purifiers”, who arbitrarily destroy books they deem nonsense as they scour through the library seeking the “Crimson Hexagon” and its illustrated, magical books. Another is the belief that since all books exist in the library, somewhere one of the books must be a perfect index of the library’s contents; some even believe that a messianic figure known as the “Man of the Book” has read it, and they travel through the library seeking him.

pilgrims disputed in the narrow corridors, proferred dark curses, strangled each other on the divine stairways, flung the deceptive books into the air shafts, met their death cast down in a similar fashion by the inhabitants of remote regions. Others went mad …

There are also inquisitors, official searchers, who

always arrive extremely tired from their journeys; …speak of a broken stairway which almost killed them; they talk with the librarian of galleries and stairs; sometimes they pick up the nearest volume and leaf through it, looking for infamous words. Obviously, no one expects to discover anything.

searching the library of babel therumpus.net

are called travellers.  The narrator who is himself a traveller tells us:

Like all men of the Library, I have traveled in my youth; I have wandered in search of a book, perhaps the catalogue of catalogues; now that my eyes can hardly decipher what I write, I am preparing to die just a few leagues from the hexagon in which I was born.

More information about the library can  be found at the following links:

In the book The Shadow of the WInd by Carlos Zafón, set in post–war Barcelona, Daniel Sempere is taken by his father to the secret Cemetery of Forgotten Books, a huge library of old, long lost titles lovingly preserved by a select few initiates. 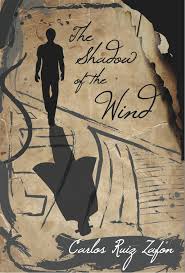 I followed my father through the narrow lane, more of a scar then a street, until the glimmer of the Ramblas faded behind us. The brightness of dawn filtered down from the balconies and cornices in streaks of light that dissolved before touching the ground. At last my father stopped in front of a large door of carved wood, blackened by time and humidity.  Before us loomed what to my eyes seemed the carcass of a palace, a place of echoes and shadows.

Like Borge´s The Universe  the library seems to defy the rules of ordinary perspective:

A blue-tinted gloom obscured the sinuous contours of a marble suitcase and a gallery of frescoes peopled with angels and fabulous creatures. We followed our host through a palacial corridor and arrived at a sprawling round hall, a virtual basilica of shadows spiralling up under a high glass dome, its dimness pierced by shafts of light that stabbed from above us.  A labyrinth of passageways and crammed bookshelves rose from base to pinnacle like a beehive woven with tunnels, steps, platforms, and bridges that presaged an immense library of seemingly impossible geometry.

In the words of his father, Daniel is told that the library is:

“ a place of mystery, Daniel, a sanctuary. Every book, every volume you see here, has a soul.  The soul of the person who wrote it and of those who read it and lived and dreamed with it.  Every time a book changes hands, every time someone runs his eyes down its pages, its spirit grows and strengthens.  This place was already ancient when my father brought me here for the first time, many years ago.  Perhaps as old as the city itself.  Nobody knows for certain how long it has existed, or who created it.  I will tell you what my father told me, though.  When a library disappears, or a bookshop closes down, when a book is consigned to oblivion, those of us who know this place, its guardians, make sure that it gets here.  In this place, books no longer remembered by anyone, books that are lost in time, live forever, waiting for the day when they will reach a new reader’s hands.  In the shop we buy and sell them, but in truth books have no owner.  Every book you see here has been somebody’s friend.

The librarian himself is: A smallish man with vulturine features framed by thick grey hair with an  impenetrable aquiline gaze.

The boy Daniel tells us:

I could make out about a dozen human figures scattered among the library’s corridors and platforms.  Some of them turned to greet me from afar, and I recognised the faces of various colleagues of my father’s, fellows of the secondhand-booksellers´guild.  To my ten-year-old eyes, they looked like a brotherhood of alchemists in furtive study.

(Picture courtesy of Scoutiegirl and inspired by the Shadow of the Wind www.scoutiegirl.com/)

According to tradition new members are expected to:

choose a book, whichever he wants, and adopt it, making sure that it will never disappear, that it will always stay alive. It’s a very important promise.  For life.

More information about the library can  be found at the following links:

A walk around Barcelona related to the book:

A fantastic trailer for the hypothetical film:

On the website of the book you can find this really cool game:

Don´t miss the next in the series: # 3  J L Borges´ The Universe

The Hogwarts Library is located on the Third and fourth floors, Training Grounds Tower, of Hogwarts Castle and contains tens of thousands of books on thousands of shelves. Overseen by Madam Irma Pince, the library is where students can go to peruse or borrow books to supplement their studies (or for personal enjoyment). The library closes at 8:00 pm.

Included in its many sections are:

“Harry wandered over to the Restricted Section. He had been wondering for a while if Flamel wasn’t somewhere in there. Unfortunately, you needed a specially signed note from one of the teachers to look in any of the restricted books, and he knew he’d never get one. These were the books containing powerful Dark Magic never taught at Hogwarts, and only read by older students studying advanced Defence Against the Dark Arts.“

The Restricted Section is an area in the Hogwarts Library closed off by a rope and only accessible to students with permission from a professor, some of the books in the library are chained to the shelves, which would suggest some of them are particularily valuable. In order to enter, they must present a signed note from a professor. The books within the Restricted Section typically discuss the Dark Arts or other information not for the general public or young children. They may be studied by older students for Defence Against the Dark Arts.

Information courtesy of J.K. Rowling and the http://harrypotter.wikia.com/wiki/

Don´t miss the next in the series: # 2    The Cemetery of Forgotten Books