Here, therefore, is a map showing Libraries under threat in the UK.

In this non-fiction section The Alibi Library would like to highlight the precarious situation in which many libraries find themselves in the UK.

We would also like to challenge our readers in London to visit as many as is humanly possible, providing reports and photos as to their current status.  We can then publish some of these here as part of our series. 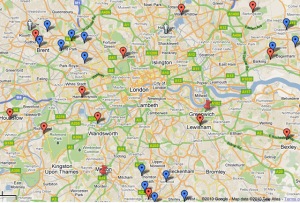 It seems that the library, in Great Missenden, which was the inspiration for Roald Dahl’s novel ‘Matilda’, , could be affected by cuts as councillors look to save almost £700,000.  WORRIED rvillagers have set up an action group to secure the future of the library where the book’s heroine ‘reads every single book in the library’.

This extract from Roald Dahl´s Matilda clearly demonstrates the importance of these libraries in our communities:_

The Reader of Books

“What’s wrong with the telly, for heaven’s sake? We’ve got a lovely telly with a twelve-inch screen and now you come asking for a book! You’re getting spoiled, my girl!”

On the afternoon of the day when her father had refused to buy her a book, Matilda set out all by herself to walk to the public library in the village. When she arrived, she introduced herself to the librarian, Mrs Phelps. She asked if she might sit awhile and read a book. Mrs Phelps, slightly taken aback at the arrival of such a tiny girl unacccompanied by a parent, nevertheless told her she was very welcome.

“Where are the children’s books please?” Matilda asked.

“They’re over there on those lower shelves,” Mrs Phelps told her. “Would you like me to help you find a nice one with lots of pictures in it?” 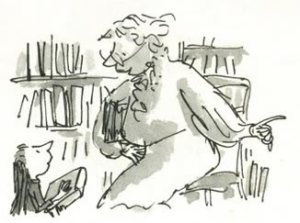 From then on, every afternoon, as soon as her mother had left for bingo, Matilda would toddle down to the library. The walk took only ten minutes and this allowed her two glorious hours sitting quietly by herself in a cosy corner devouring one book after another. When she had read every single children’s book in the place, she started wandering round in search of something else.

Mrs Phelps, who had been watching her with fascination for the past few weeks, now got up from her desk and went over to her. “Can I help you, Matilda?” she asked.

“I’m wondering what to read next,” Matilda said. “I’ve finished all the children’s books.”

“You mean you’ve looked at the pictures?”

Mrs Phelps looked down at Matilda from her great height and Matilda looked right back up at her.

Mrs Phelps was stunned. ”Exactly how old are you, Matilda?” she asked.

Mrs Phelps was more stunned than ever, but she had the sense not to show it. “What sort of a book would you like to read next?” she asked.

Matilda said, “I would like a really good one that grown-ups read. A famous one. I don’t know any names.”

Mrs Phelps looked along the shelves, taking her time. She didn’t quite know what to bring out. How, she asked herself, does one choose a famous grown-up book for a four-year-old girl? Her first thought was to pick a young teenager’s romance of the kind that is written for fifteen-year-old schoolgirls, but for some reason she found herself instinctively walking past that particular shelf.

“Try this,” she said at last. “It’s very famous and very good. If it’s too long for you, just let me know and I’ll find something shorter and a bit easier.”

I must be mad, Mrs Phelps told herself, but to Matilda she said, “Of course you may try it.” 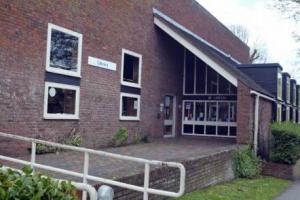 Over the next few afternoons Mrs Phelps could hardly take her eyes from the small girl sitting for hour after hour in the big armchair at the far end of the room with the book on her lap. It was necessary to rest it on the lap because it was too heavy for her to hold up, which meant she had to sit leaning forward in order to read. And a strange sight it was, this tiny dark-haired person sitting there with her feet nowhere near touching the floor, totally absorbed in the wonderful adventures of Pip and old Miss Havisham and her cobwebbed house and by the spell of magic that Dickens the great story-teller had woven with his words. The only movement from the reader was the lifting of the hand every now and then to turn over a page, and Mrs Phelps always felt sad when the time came for her to cross the floor and say; “It’s ten to five, Matilda.”

During the first week of Matilda’s visits Mrs Phelps had said to her, “Does your mother walk you down here every day and then take you home?”

“My mother goes to Aylesbury every afternoon to play bingo,” Matilda had said. “She doesn’t know I come here.”

“I’d rather not,” Matilda said. “She doesn’t encourage reading books. Nor does my father.”

“But what do they expect you to do every afternoon in an empty house?”

“Just mooch around and watch the telly.”

“She doesn’t really care what I do,” Matilda said a little sadly.

Mrs Phelps was concerned about the child’s safety on the walk through the fairly busy village High Street and the crossing of the road, but she decided not to interfere.

Within a week, Matilda had finished Great Expectations which in that edition contained four
hundred and eleven pages. “I loved it,” she said to Mrs Phelps. “Has Mr Dickens written any
others?”

“A great number,” said the astounded Mrs Phelps. “Shall I choose you another?”

Over the next six months, under Mrs Phelps’s watchful and compassionate eye, Matilda read the following books:

Nicholas Nickleby by Charles Dickens
Oliver Twist by Charles Dickens
Jane Eyre by Charlotte Bronte
Pride and Prejudice by Jane Austen
Tess of the D’Urbervilles by Thomas Hardy
Gone to Earth by Mary Webb
Kim by Rudyard Kipling
The Invisible Man by H. G. Wells
The Old Man and the Sea by Ernest Hemingway
The Sound and the Fury by William Faulkner
The Grapes of Wrath by John Steinbeck
The Good Companions by J. B. Priestley
Brighton Rock by Graham Greene
Animal Farm by George Orwell

It was a formidable list and by now Mrs Phelps was filled with wonder and excitement, but it was probably a good thing that she did not allow herself to be completely carried away by it all. Almost anyone else witnessing the achievements of this small child would have been tempted to make a great fuss and shout the news all over the village and beyond, but not so Mrs Phelps. She was someone who minded her own business and had long since discovered it was seldom worth while to interfere with other people’s children.

“Mr Hemingway says a lot of things I don’t understand,” Matilda said to her. “Especially about men and women. But I loved it all the same. The way he tells it I feel I am right there on the spot watching it all happen.”

”A fine writer will always make you feel that,” Mrs Phelps said. “And don’t worry about the bits you can’t understand. Sit back and allow the words to wash around you, like music.”

“Did you know”, Mrs Phelps said, “that public libraries like this allow you to borrow books and take them home?”

“Of course,” Mrs Phelps said. “When you have chosen the book you want, bring it to me so I can make a note of it and it’s yours for two weeks. You can take more than one if you wish.”

From then on, Matilda would visit the library only once a week in order to take out new books and return the old ones. Her own small bedroom now became her reading-room and there she would sit and read most afternoons, often with a mug of hot chocolate beside her. She was not quite tall enough to reach things around the kitchen, but she kept a small box in the outhouse which she brought in and stood on in order to get whatever she wanted. Mostly it was hot chocolate she made, warming the milk in a saucepan on the stove before mixing it. Occasionally she made Bovril or Ovaltine. It was pleasant to take a hot drink up to her room and have it beside her as she sat in her silent room reading in the empty house in the afternoons. The books transported her into new worlds and introduced her to amazing people who lived exciting lives. She went on olden-day sailing ships with Joseph Conrad. She went to Africa with Ernest Hemingway and to India with Rudyard Kipling. She travelled all over the world while sitting in her little room in an English village.

For more information on the illustrations of Quentin Blake visit:

Coming up; Star Wars, The name of the Rose… 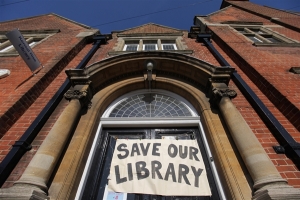 The cuts made to library services across Europe mean that many branches are themselves in danger of becoming works of fiction.  In the near future these important buildings may be nothing more than fairy tale places whereof  grandparents speak to their grandchildren, alongside enchanted (unpolluted) forests and crystal clear streams  -No doubt the fairytale palaces will have survived (although they may need to resemble castles).

Kensal Rise Library  was one of Brent’s cosy and much loved local libraries, situated in a fine historic building on the corner of Bathurst Gardens and College Road in London, United Kingdom. The site was donated by All Souls College, Oxford,[1] originally as a reading room at the corner of College Road and Bathurst Gardens,  to commemorate Queen Victoria’s Diamond Jubilee in 1896, but only opened three months before her death. The architects were Done, Hunter & Co of Cricklewood.

The opening took place on Thursday, 27 September 1900 (being half day closing locally),  performed by the celebrated American author, Mark Twain, who had stayed at Dollis Hill House for the summer. Scots-American steel magnate and philanthropist, Andrew Carnegie, granted of £3,000 in September 1903 to enlarge the building. 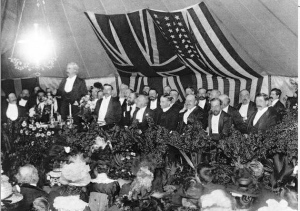 The first member of staff was H.H.Hubbard, an ex-serviceman wounded in the Boer War. His title was “Attendant” and he reported to Librarian at Willesden Green.

Some 80 people per day used the Reading Room in its first week, and this figure rose to 150 after six months.  Readers originally chose their books from a printed catalogue, then requested them at the counter, whereupon they would be fetched from the shelves by a member of staff, but in 1922 it became the first library in the Borough of Willesden to allow the public to choose their books from the shelves.

A Children’s Library was established in an upstairs room in 1934, and this was decorated with murals depicting scenes from children’s classics. They were painted by two students of Willesden School of Art, Dudley Holland (‘The Three Musketeers’ and ‘Alice Through the Looking Glass’) and Maurice de Sausmarez (‘Treasure Island’). Though no longer in position, they are still extant in the building. Another upstairs room was designated as a Study Room for children.

When The library was threatened with closure, a large campaign to save it was led by figures including Alan Bennett, Philip Pullman, Zadie Smith, Nick Cave and Pet Shop Boys.[2] 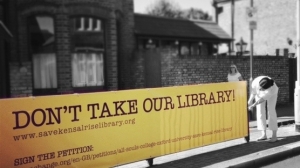 Due to the current closure of the library, volunteers in the local community have set up a pop-up library outside.[5]

Coming up Matilda, Ghostbusters, Star Wars, The name of the Rose…