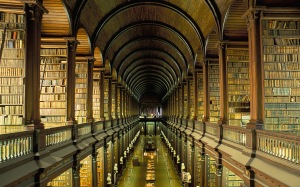 “There is more knowledge here than anywhere else in the galaxy.“―Jocasta Nu

The Jedi Archives are a fathomless collection of ancient knowledge and research dating back thousands of standard years.[6]

The Archives are open at all hours and are accessible to all Jedi in need of information.

Overseen by the Council of First Knowledge, the Archives is directly run by the Chief Librarian. While not necessarily a Council member themselves, the Chief Librarian organizes a staff of Lore Keepers to maintain the Stacks and update them with new information. Additionally, the Archives employ several JN-66 and SP-4 analysis droids. These droids wander the Stacks in the main hall assisting those Jedi in need of direction.

Maintaining the academy goes hand in hand with preserving the knowledge banks at the Temple; if the base of knowledge does not constantly grow, the academy can not evolve and progress. Having direct oversight of theLibrarian’s Assembly, the Archives are presided over by a Chief Librarian who sometimes sits on the Council themselves. Members of the Council are granted access to the Holocron Vaults located within the Archives, a highly secured set of chambers used to protect the ancient holocrons and their secrets.

“We are keepers of the wisdom of the Jedi. We maintain the Great Library, we oversee the teachings of the younglings, and we seek out the ancient histories and Holocrons that will bring us greater knowledge of the light side of the Force. But we are more than just caretakers. We are also guardians.“―

Master Obba explaining the duty of the Council of First Knowledge. 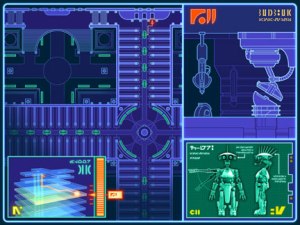 Known as the main entrance to the Archives due to the great, hand-carved wooden doors at its front, the First Hall contains great records on philosophy and manuscripts detailing the history of the Republic.[10] Personal journals of over a billion Jedi are also held here.

Running perpendicular to the first and third halls, the Second Hall contains data dedicated to mathematical and engineering sciences. Works related to the topics on hyperspace and how to achieve it and construct engines and vehicles capable of such feats are among the blue-glowing Stacks. Floor-plans of the galaxy’s government buildings and other points of interest are found here, along with many manufacturers’ weapon designs.[10] The computer systems here have readouts on all Temple activities including a databank dedicated to the Jedi High Council‘s current seating arrangements.[1] Splitting into two aisles, the hall has access ways into the two Holocron Vaults on that end of the chamber

The Third Hall is directly opposite the first and is filled with information on the geography and culture of each and every known planet in the Galactic Republic, including starmaps of interstellar and planetary regions, and detailed analysis on specific civilizations were updated and stored here

“Master Kenobi says that there are even texts here that are forbidden to be read.”
“The Archives hold a great many secrets, it is true.“
―Ahsoka Tano talking to Madame Jocasta Nu

The Fourth Hall, running on the same plane as the second is also split into two smaller wings; each dedicated to zoological research relating information on every known species of flora and fauna in the galaxy. 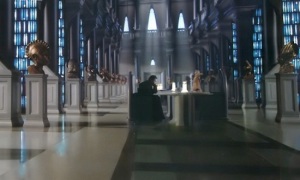 Mainly Jedi.  Visitors are welcome to scan or copy almost any data in the Stacks, though removal of any material from the Archives is strictly prohibited. Remote access to the databases is near impossible, with eradicators built into the Temple’s outer walls and firewalls in the database mainframes.

The Archives are equipped with private rooms used for diligent researches that go on for days without sleep. The Chief Archivist would also present information here for Jedi preparing for missions.

Coming up;  The name of the Rose…